OK so – before we start, it’s probably fair to point out that we didn’t go any further north in Bali than Ubud, and were only there for 9 nights. So if you’re looking for an ultimate Bali travel guide – this isn’t it! What this is, is our opinion on this bloody wonderful place from our relatively whistle-stop tour.

I’ll be honest. First impressions? Eeeeeeeeek… Not so great. The journey was my first long-haul flight (other than NYC) and I HATED IT. Cramped up in Economy class, I got a grand total of about 2 hours sleep throughout the 19-hour two-leg flight, broken up only by a stop in Dubai, which did not ease matters in the slightest. As we stepped off of the plane – me in a long-sleeved tee and extremely thick joggers – I genuinely thought I was going to pass out. Or at least puke. Or at the VERY least punch someone.

Actually, stet that – the dullness was momentarily broken by the Emirates flight staff waking us up at what was probably near to 3am GMT, with a happy honeymoon cake, card, and a polaroid of me trying 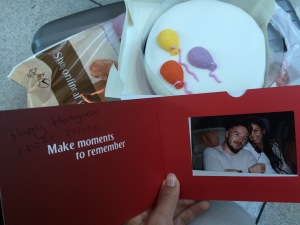 to control my laughter and Noel looking hilariously dazed. FYI, we weren’t on honeymoon. The mix-up was actually caused by Noel having rung Emirates a few days earlier in order to try and swindle an upgrade to Business Class, and telling them we were off on our post-nuptials to try and gain the sympathy vote. As you now know, it did not work. Evidently, we couldn’t come clean during the mid-flight ceremony as THAT would have been RIDICULOUS.

Anyway. Once landed in Bali Denpasar, exhausted, sweating and carrying a ridiculous amount of luggage (my excessive amount of clothing and Noel’s excessive amount of camera-y stuff) we scoured the arrivals hall for our driver, Vincent, who was nowhere to be seen. I guess this is where we got our first glimpse of the kind nature of the Balinese as, seeing our confusion, a taksi driver came over, worked some magic and in seconds, voila le Vincent. He didn’t ask for any kind of tip – just shook our hands and wandered off! Turns out humans can be nice…

Oh, and it was raining. It was actually forecast thunderstorms for the entire duration of our trip, so this wasn’t a huge surprise to me, but it was still a dampener on the whole affair (pun intended). The last thing we wanted to do after having spent a fairly hefty chunk of money and flown literally across the world was inspect the inside of our accommodation for ten days, unable to explore the outside world due to constant bloody rain. I wouldn’t have minded but we booked to travel in the driest of dry seasons for want of getting some sun. Anyway, more on that later. For now, let it be known that as we finally pulled into Villa Carlos, it was dark, still raining, still thundery, and… And then the bugs started.

FYI, bugs and other icky creatures are going to feature fairly heavily in this post so… Yeah. So as we opened the door to our dimly lit accommodation, we encountered a lizard, a frog, a small village worth of ants and god knows what else.

Oh – while I remember, the journey itself caused further apprehension. Because if you Google image search Bali, you get this: 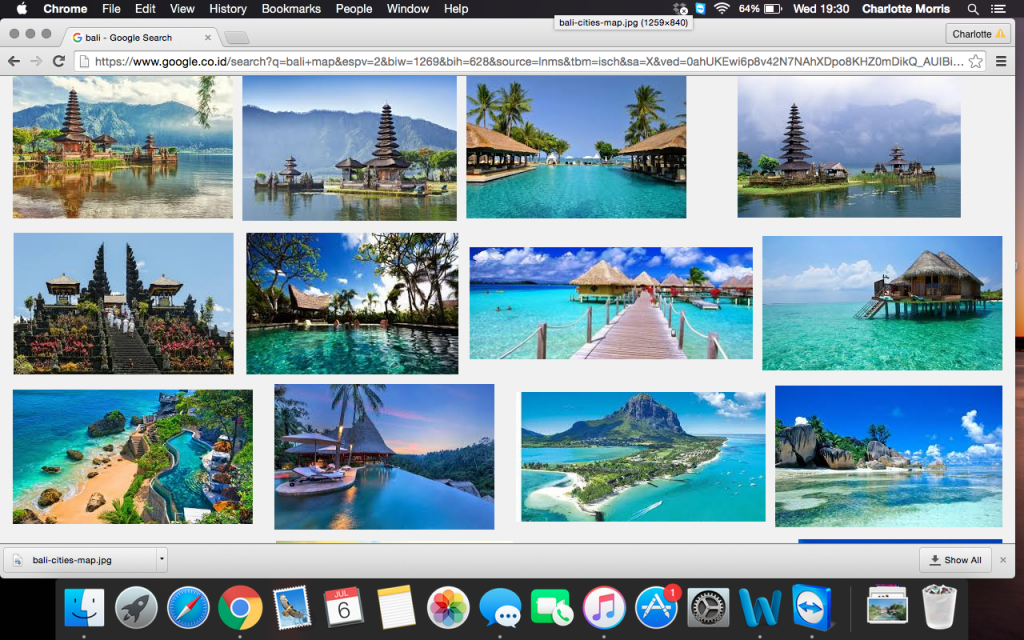 What you do not get is this: 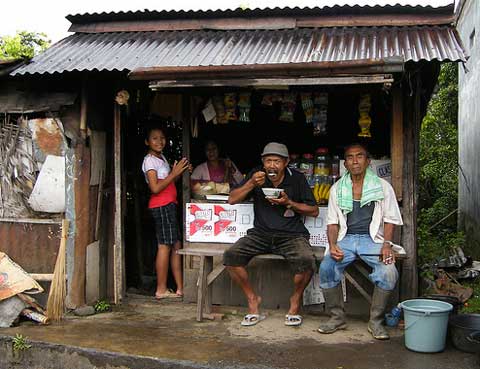 Which is what about 75% of Bali looks like. That is waroeng, and it is what lines every street we went down during the entirety of our stay. It’s what typical Balinese shops and restaurants look like: shanty-style ‘buildings’ propped up with bamboo poles or thrown together with exposed breeze blocks, proffering really, really not nice looking food or fly-covered fruit. That sounds – and is – disgustingly ignorant on my behalf. But as I mentioned, it was my first long-haul journey, and so my first experience of anything quite so removed from Western culture. So I guess it was just the initial culture shock that had me concerned – wrongfully so – about the ‘real’ Bali, if you will.

Back to a weary us, and Villa Carlos: initial exploring done, we jumped into bed, practically soldered the mosquito net down around our four-poster bed, and promptly fell asleep. All in all, Day 1 came to a close with me feeling not as ecstatic as I’d have hoped.

Approximately 5 hours later, Day 2 began with what sounded like a cockerel having a rabid seizure on our window ledge. And – more rain. Or at least what sounded like it. I’d soon realise that it was just the drip-dripping of the previous night’s downpour falling onto what can only be described as the tropical jungle surrounding our villa. I left Noel in (the enormous, and super comfy) bed to doze whilst I went out to explore.

The house and gardens were beautiful. We’d found the place on AirBnB and instantly fallen in love with it. 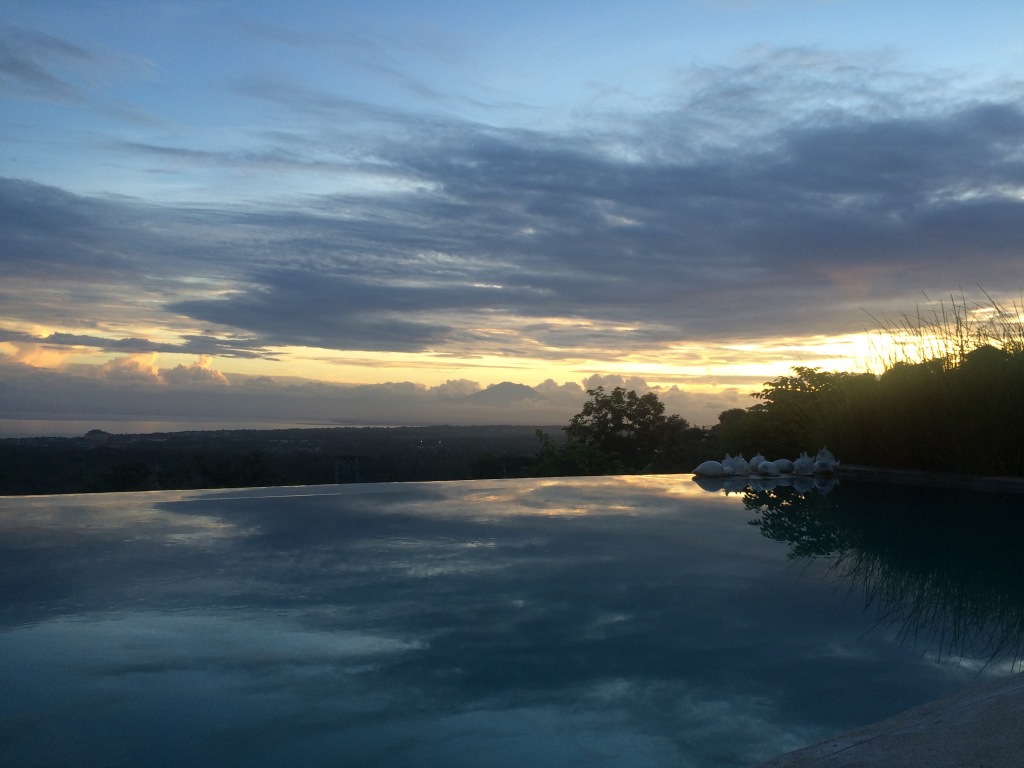 The infinity pool, tropical landscaping and off-the-beaten-path location were big ticked boxes, but what really sealed the deal was the reviews pertaining to the owner, Carlos, who was apparently an exceedingly good host and all-round kind gentleman. You’ll learn more about him later. 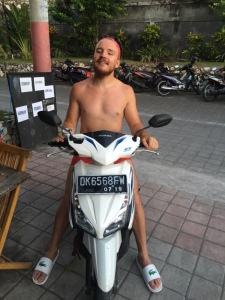 Noel woke up, and we decided it was time to hop on the little automatic scooter we’d hired from Carlos and take a look around the local area, which is home to the much-famed Padang Padang Beach, the Single Fin Cafe and the adjoining Nalu Bowls. Luckily the weather had more or less cleared up by this point, and so in the skimpiest of outfits, we set off.

A word, at this point, about driving in Bali. In fact, I’m not sure we can even call it that. Donkey Kong comes to mind, except with more honking and less safety precautions. All rules go out the window: overtaking is more of an extreme sport than it is a casual manoeuvre, pedestrians get about as much acknowledgement as roadkill, driving on pavements is most definitely permitted and helmets are a myth in the more rural areas. Oh, and every third scooter (the roads are mainly full of scooters. Honestly, cars are actually a bit of a pain in the bum) will be transporting an entire family. I’m being serious. Four people to one scooter was common; the most we saw was five. I’m talking toddlers propped up against handlebars with remaining offspring sandwiched between parents.

At first, these were slightly heart-attack inducing scenes; by the end of our trip we’d kind of started to see the logic in it all… After all, it cost something like £1.20 to fill up the scooter tank, which we’d do at waroengs on the way to wherever we were going. Because petrol is sold at cafes. On wooden racks. In vodka bottles. And poured into tanks with the help of a plastic funnel. 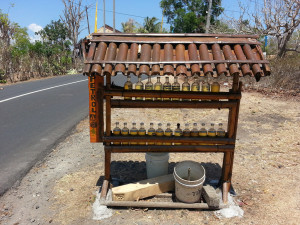 This is literally how petrol is sold. Image from Flickr

Aaaaanyway. Tank full, we headed to Padang Padang beach, which was disappointing. I imagine that empty, it’s a lot prettier but this ‘secret beach’ was full to burst with both tourists and a proportionate number of local tradespeople, selling anything and everything from grilled corn on the cob to I <3 Bali caps. We stayed for a little while, pretending to enjoy sunbathing, and then quickly shuffled off.

Next stop was Single Fin and Nalu Bowls. Nalu Bowls sells acai bowls, or variations thereof, and we probably ate about 16 of them during the trip. Yeah, they’re a little overpriced (around 80-100k inc tax, which works out at about a fiver per bowl) but they’re just nice. And really freaking Instagram friendly. 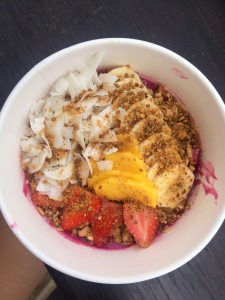 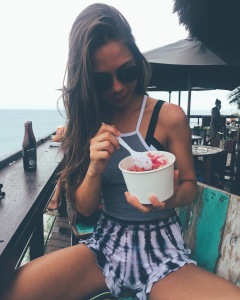 Me candidly enjoying an ‘Uluwatu’

So this is a definite recommendation from us. Ignore the flies, wasps and other creatures dancing around the prep area; this is genuinely nothing on the standard of kitchens in Bali. 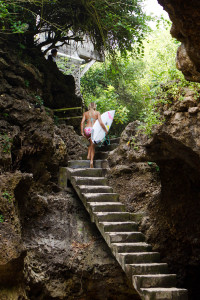 Granola-bowling done, we noticed that there was a tiny beach at the bottom of the cliff on which Single Fin stands, and decided to head down there. We didn’t get far before realised we probably wouldn’t be able to continue as we hadn’t actually brought hiking boots, a compass, walking sticks and several sherpas with us. Joking aside, the trip down there is somewhat treacherous as you have to not only avoid several hawkers apparently offering the best massage in Bali, but also navigate the ‘stairs’. I didn’t actually manage to take a picture for want of not tripping and breaking my neck, and annoyingly the only picture I can find makes them look like some kind of serene tropical fucking paradise; well done that girl is all I can say. Anyway, once we got down to the beach we realised it wasn’t even a bloody beach after all, but more of a cavey alcove thing. It’s actually the bit on the picture at the top of this post. To be honest, it was quite beautiful, as I’d never seen anything like that before, and I guess seeing it was worth the risk of falling to an untimely death.

As the day drew to a close, we’d seen the cast of A Bug’s Life chilling far too close to foodstuffs than we were comfortable with, the petrol station reinvented, several dozen apparent attempts at a new Guinness World Record for how many humans can we fit on a Honda Vario, and Google Image top search result beaches turning out to be barely a cut above Weston-super-Mare. Culture shock? Indeed. Disappointment? Not entirely. There was still something intriguing about the local area. And the food was great (later that day we ate, in splendid form, at Bukit Cafe – the menu is the stuff of healthy, organic dreams) – a very important factor, obviously. Whilst it wasn’t the idyllic paradise I’d been waiting for, this more rural part of Bali seemed to attract two kinds of people: surfers (the beaches are some of the best surf beaches around) and those seeking the easy life. And there was something extremely peaceful about that. Day 2 done, we were keen to find out more about this magical island.