The Most Hated Man on the Internet

It’s something like 3am. I have two finals in a few days, but it’s 3am and finals are not on my mind.

What is on my mind, is a man. I can’t see his face, because I don’t know what he looks like. But there’s an object in his hand – a phone. On that phone are stored the originals of X’s images, and therefore the key to sorting this whole wretched mess out.

But it’s just dawned on me that I will never find that key. I had to text X at this here silly o’clock and apologise profusely, because it’s broken and I can’t fix it. How can I find a man I don’t know the identity of? OK – bad guys get found all the time. But how do I know he’s the only person with the images? How do I know he even is just one person? How many copies of the images are on how many devices? How the hell did he get the images in the first place? Our theories have been a dime a dozen, but concrete answers have been elusive.

I do however decide it’s time for X to go to the police station, although this is only for argument’s sake as I already know that it’s going to prove fruitless. From what X reports, the officer on the front desk offers absolutely no advice other than to tell X that the distribution of sexually explicit images of an adult is not a crime, which we already knew. As it happens, X was 17 in two of the litigious images, but we have no way of proving this. The officer offers X an appointment for later in the week.

I’m scrambling to find any relevant legislation before the appointment but I know it’s going to be pointless.

Imagine you’re the victim of a crime, a crime that is controlling your life. You can’t go to sleep properly because you’re scared you’re going to wake up and find your phone flooded with even more malicious emails. You can’t look at your boyfriend properly because you’re terrified that he’s ashamed of you. Every time you speak to your parents you wonder if they’re going to get an email soon notifying them of the fact that your nudes are on the Internet.

What would keep you going? Justice, of course. The feeble yet ever glowing hope in the back of your mind that the heinous person behind all of this is sooner or later going to pay for the damage they’ve caused you, even if that damage will never truly be rectified.

And then you realise that actually, what they’ve done is completely legal. And they could do it again, and again, and again and you would be able to do nothing more than hide, hoping that it just goes away.

No provider or user of an interactive computer service shall be treated as the publisher or speaker of any information provided by another information content provider.

Let’s go back to Hunter Moore, because he is really just the epitome of everything that is wrong with this vulgar situation. Hunter Moore started off as as one of those angry ex-boyfriends. He began to show friends and coworkers his ex-girlfriend’s nudes and when he realised that guys got off on that kind of thing, decided to set up a website. Fast-forward a few years and Mr. Moore is making somewhere in the region of $13,000 a month off of advertising space on IsAnyoneUp.com (which has since been shut down). Now the reason Hunter Moore gained so much notoriety is essentially because he is a complete sociopath; his career aspirations are to “just fucking dominate the world, like the white P. Diddy”. And he also knows damn well that he is pure evil. Check out this extract from an interview with Forbes:

“I’m gonna sound like the most evil motherf***er – let’s be real for a second: If somebody killed themselves over [being on the site]? Do you know how much money I’d make? At the end of the day, I do not want anybody to hurt themselves. But if they do? Thank you for the money.”

Rolling Stones Magazine interviewed him as he was, and is, arguably an interesting character – in the same way that a dung beetle might be interesting to watch from behind a glass catch, I’m sure – and dubbed him “The Most Hated Man on the Internet”. If you visit his YouTube channel, you might stumble across a video from his “educational series” in particular instructing the audience on “how to have sex with a girl on her period”. And if you read the Rolling Stones article, you get a somewhat rounded picture of the revenge porn mogul’s life: sex, drugs and some fucking weird parties. Whilst I am sort of angry at how much the writer glorifies Moore, making him seem like some sort of Wolf of Wall Street minus ALL the brain cells, he does sound completely perplexed by the entire situation. Here’s a snippet, because I’m kind like that: 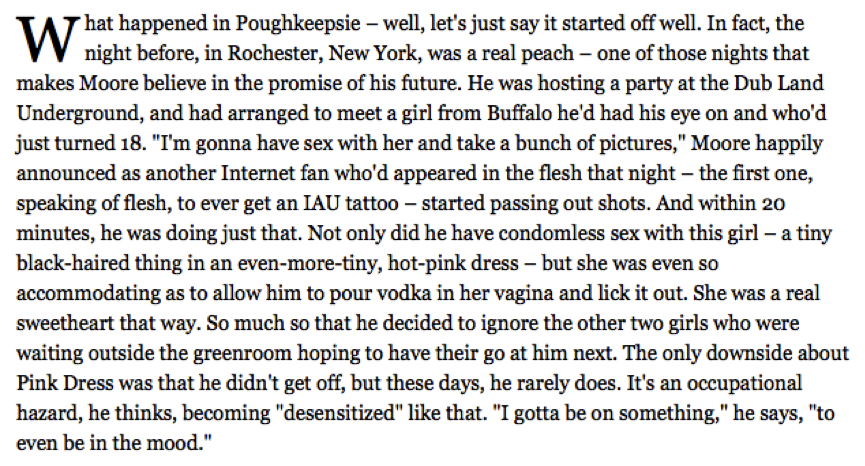 Hunter Moore was arrested in 2012. This sounds good, right? Wrong. Hunter and his partner, a Mr. Evens, were arrested not because they were ruining people’s lives and laughing in their faces when confronted by them but because they’d been actively sourcing material for the website by hacking into email addresses and yanking pictures right out of people’s inboxes. Luckily, they one day did that to the wrong woman; or the wrong daughter at least, because when it happened to Charlotte Laws’ daughter Kayla in 2012, Charlotte decided she would stop at nothing to protect Kayla.

I am of the firm opinion that Mrs Laws is the only person we have to thank for the fact that IsAnyoneUp.com is no longer active, mostly because the people that should care, that are paid to care and that are trusted by the common man to care, do not fucking care. I can’t read or write about the Laws’ story without crying and being covered in goosebumps so I’ll redirect you to it.

Concretely speaking, what advice do I have for any potential victims at this stage? I don’t want to say, “don’t send nudes” because firstly that’s not going to happen and secondly if this happens to you, it’s not your fault. Luckily (sort of) our social media crazy generation means that if you search your name, you’ll most likely get a whole load of links relating to Twitter, Facebook, LinkedIn and any other similar websites before you get to any undesirable ones. This means that if an employer or family member is going to do a media search on you, they would have to be really, really bored to get to the PG13 section. You can also use websites such as Tineye to search for images on the Internet, but they’re not always helpful (they weren’t in our case). This article gives a more comprehensive list of advice than I could ever go into, so I advise any victims to give it a read: it’s about “gaming Google” – modifying search results in order to push any nasty ones as far back as possible.

And what about us? Well, I’ve now got a head full of even more nasty images of nasty people. X has text me more or less every hour of the past week, scared of what’s happening, what’s going to happen and more or less certain that there won’t be an end to what is turning into a living nightmare. We’ve both cried a lot, X out of panic and me out of frustration and embarrassment that my treasured system is failing the vulnerable. Not only that, but the knowledge that the nudes are STILL up there despite multiple emails having been sent to the website host is constantly sat in the back of our minds; a filthy grey shadow with a face we can’t see and a thick layer of impenetrable armour.

Except for this prick. Thank you, Mrs. Laws. 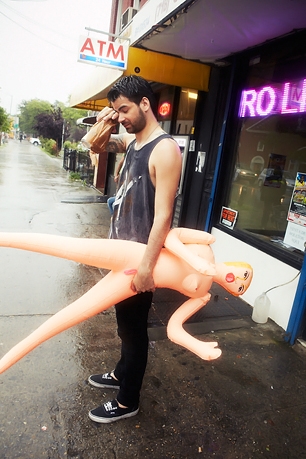 PS: as ever, I implore you to please sign this petition.

Confessions of the New Kid on the Cul de Sac