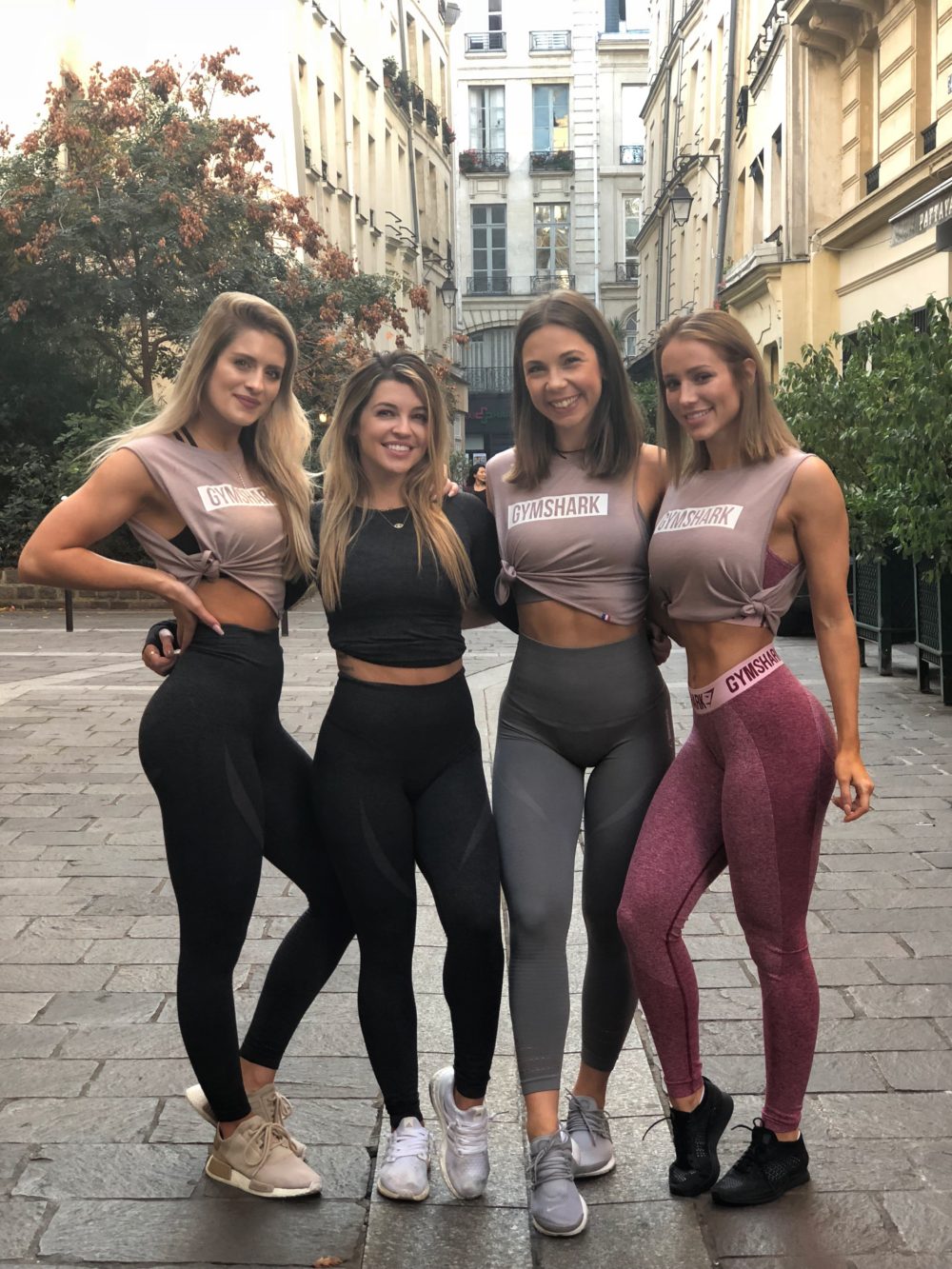 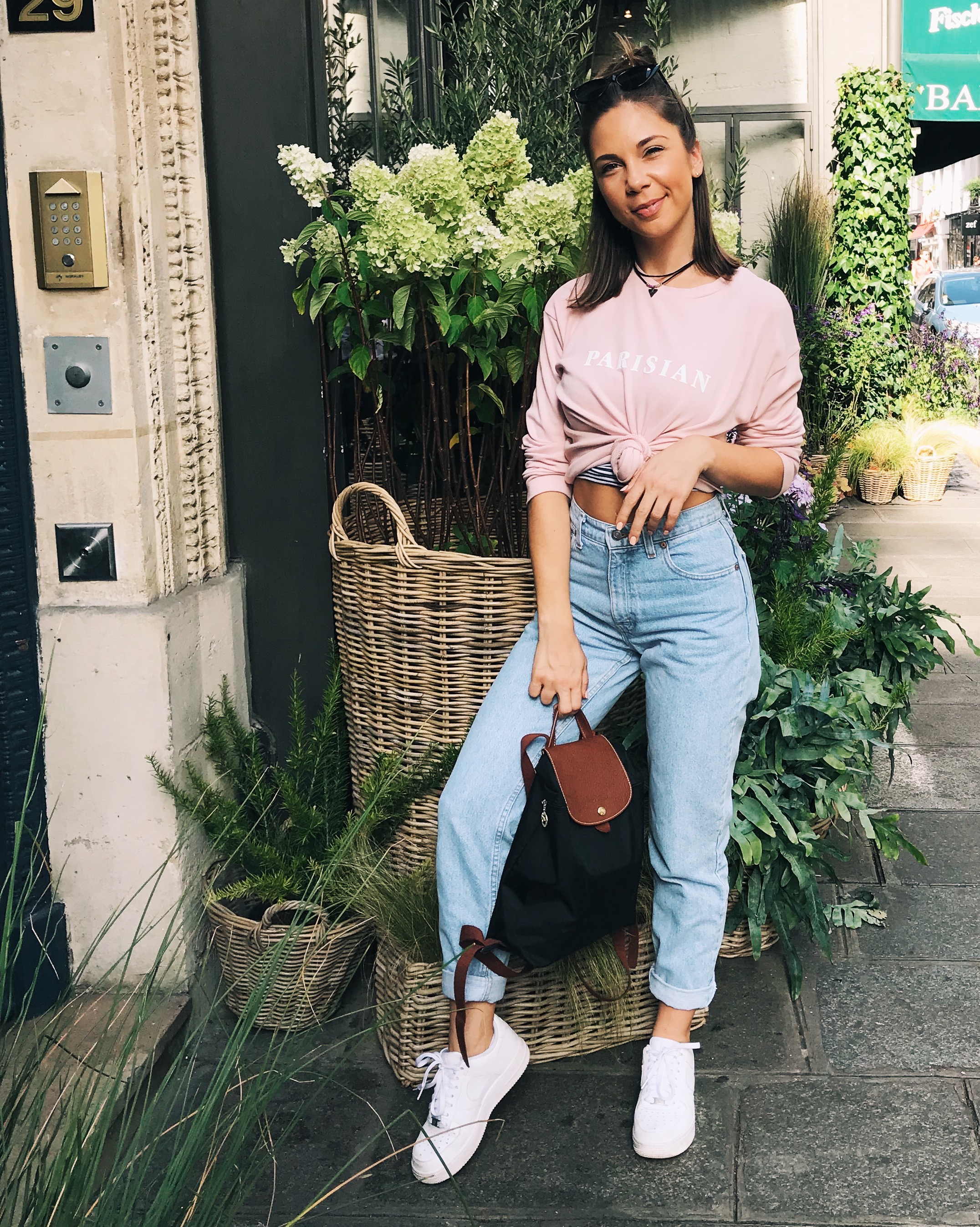 Last weekend marked a long weekend in Paris, and the third Gymshark pop-up store (with the predecessors having been in NYC, for Nikki B’s first range, and London earlier this summer). With the success of the two previous stores having been pretty much off the scale, I was eager to see what impact a pop-up store would have in a non-English speaking country. Over the past six months or so Gymshark has certainly been increasing its roster of French athletes, with big names like Sissy Mua and FitbyClem now forming part of the Gymshark family. Nevertheless I was somewhat dubious that the turnout would match the London or New York offerings.

Well, that doubt went out the window on day one. The store opened at 10am and we arrived just after 9am to see a queue wrapped around Rue Française and Rue Mauconseil. The first people in the line were actually from New Jersey, of all places, and had been there since 7.30am. Dedicated af.

My job this time shifted from photographer (which was now in Noel’s capable hands as his usual role of videographer was being carried out by his wonderful new in-house videographer Thom) to managing the line at the front of the store. Whilst this is always an awkward job – hey, you’ve already been waiting four hours but would you like to wait some more? Yep, can’t come in yet… – I actually really enjoyed it! It’s a really sociable place to be; generally, people are happy to chat about why they’ve come to the store, who they’re there to see, what they want to buy etc. It’s a great way to get to know the customer and also to distract from the fact that your feet are pretty much destroyed after 6 hours of standing…

The aesthetic of the store was absolutely stunning; it was in a really popular part of Paris (Le Marais), home to a lot of boutiques and independent stores but actually just around the corner from Les Halles, a major shopping centre. So the location was perfect! The store was all white, inside and out, but with plenty of subtle design aspects that were absolutely brilliant – like the bleu blanc rouge LED lighting on the ceiling, the minimalistic decals or the first Gymshark screen-printer, which Ben had had framed and flown over. The store itself was almost akin to an art gallery, with a kind of mezzanine level where the athletes were conducting their meet-and-greets over the weekend. Our ‘uniform’ was also incredible – a nude pink t-shirt, vest or crop top with Gymshark screen printed over the chest, a french flag on the hem and a map of France on the back. I will be repping that t-shirt forevermore… 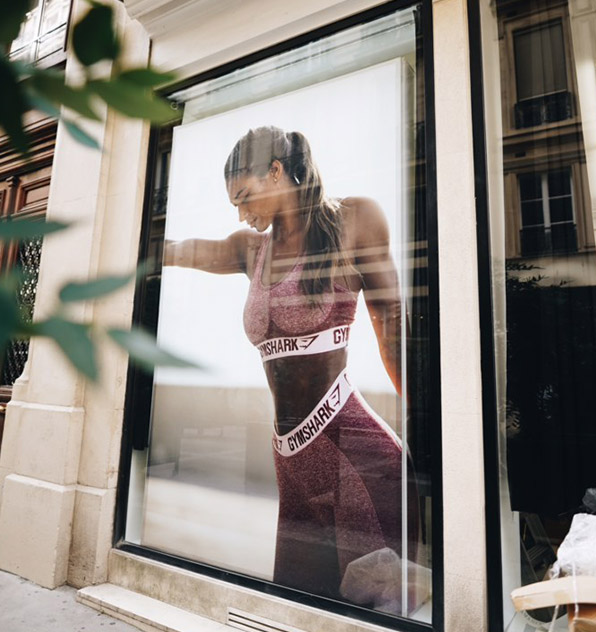 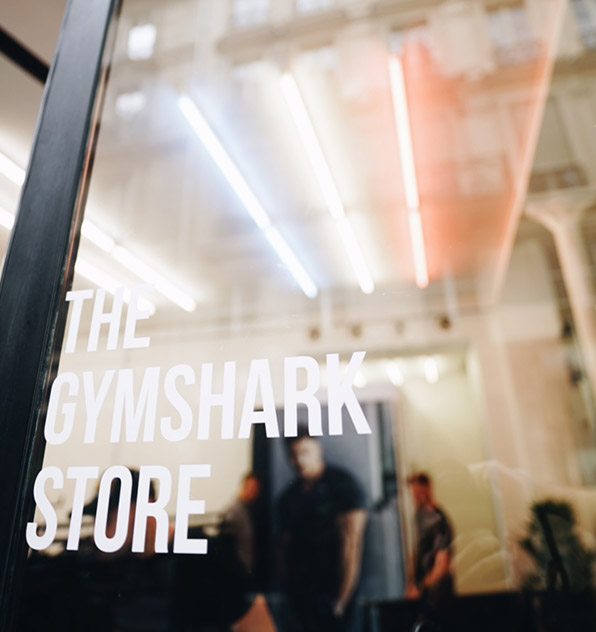 What always interests me most is just how far people will travel for Gymshark events, be it meet-ups, attendance at expos or the new era of pop-up stores. People got on the Eurostar from London. They got on planes. They drove from Bruxelles, or far away regions of France. They literally spend half an hour to an hour max in the store itself but they always go home happy, and glad they came. Being a part of that experience is electrifying.

We also had some really nice ‘family’ moments over the weekend; the French athletes were super friendly, and we had a few group meals booked up so it meant we got to socialise quite a lot. That aspect can sometimes get lost in the pace of everything, but actually, it’s really important for everyone to interact with each other in a more relaxed vibe. Nikki and Whitney also brought Miles and Stefan, their respective other halves, so it was cool to be able to get to know them. FYI, Stefan gets 45974537 boyfriend points for his enthusiasm as an Insta-BF!!!

On that point, after the store had closed on Sunday Whitney, Nikki, Robin and I took a picture (the featured pic on this post) outside the store, which I uploaded to the ‘gram later that evening. At this point I was on about 15.5k followers and would get 5-10% engagement, a very healthy level for my following. Somehow that picture went absolutely viral and to date has 23,000 likes and nearly 250 comments! I also got around 4k new followers in the space of about 72 hours. A similar thing has happened to me before – I know it as ‘hitting the Explore page’ – where the Instagram algorithm will decide that your picture is worthy of featuring on the Explore page so your exposure to the world just increases literally tenfold. It’s such an odd feeling; when the likes are still literally flooding in on the same picture three days later, it’s almost overwhelming. I don’t really have an end goal when it comes to my Instagram – I absolutely love the creative aspects of it, especially when it comes to fashion posts, and I love the accountability from a fitness perspective. I find support and friendship through followers/following, and for me, what is typically seen as a cyber-community is very real! So when something as crazy as that happens it’s hard to figure out the next steps. For me, I’ve tried to ride the wave as it were – continuing to upload every day – and just enjoy it!

A few of us stayed over on Sunday night and our flight was quite late on Monday, so Robin and I took the opportunity to go and explore Paris and also to get a whole load of content! The hotel was in an area I’d never really visited, right next to the Palais-Royal and the adjoining gardens, which are lined with super-French cafés. We tried the Café Kitsuné (as in Maison Kitsuné) and were blessed with the best soya lattes and matcha financiers OF ALL TIME. Granted we left with our pockets a lot lighter, but it was a worthy treat! 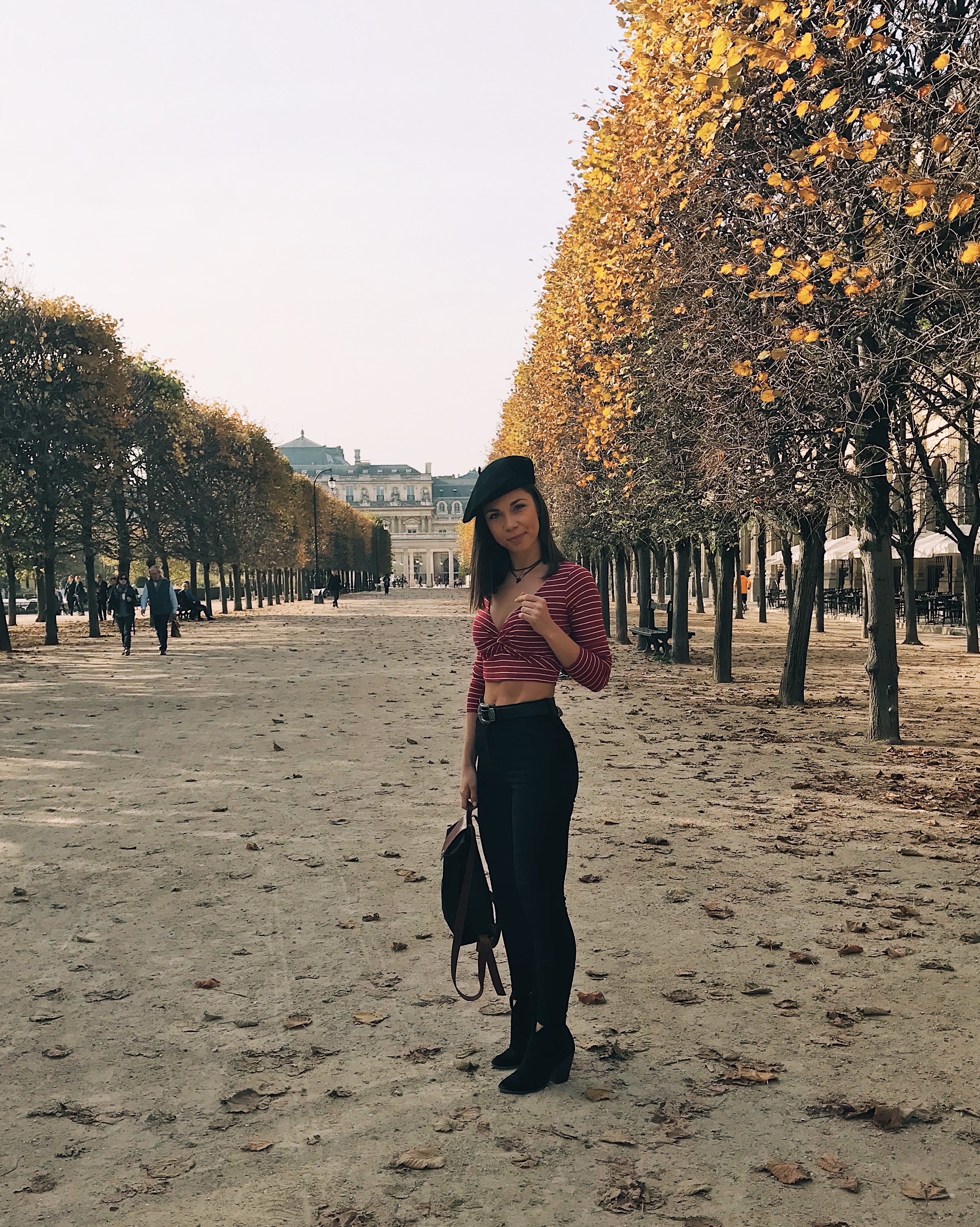 We then went over to the Trocadero, a famous Eiffel Tower viewing point, as Robin had never seen the Eiffel Tower before. I’d like to just mention at this point that, in accordance with European dressing conventions for mid-October, we were wearing jumpers and skirts (mine PVC). It was actually about 25 degrees celsius with NO wind, so we spent the day absolutely dying of heat… Anyway, on arrival, Robin freaked at how amazing the Eiffel Tower is and I was ever-so-smug in my Frenchness about this! 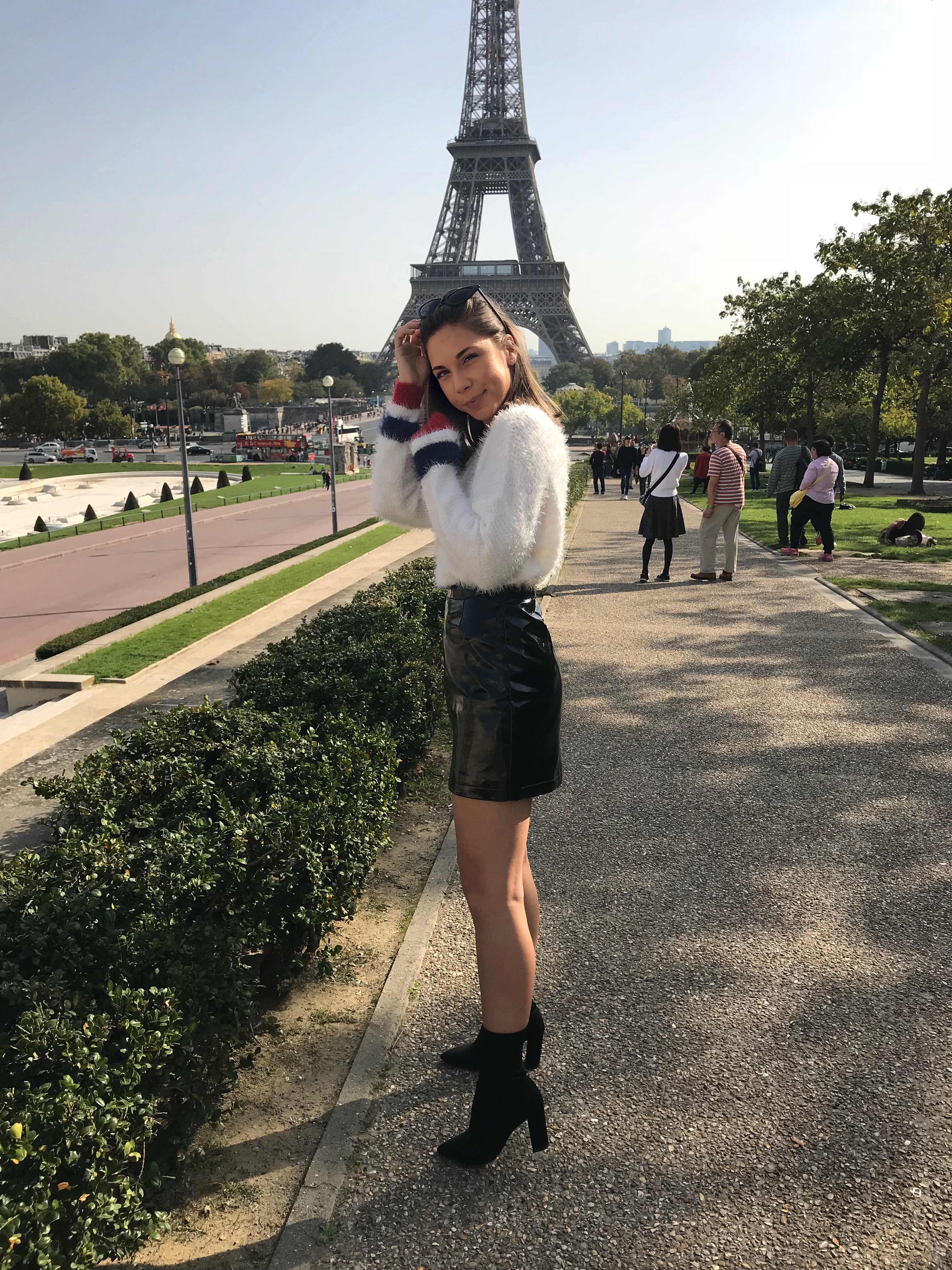 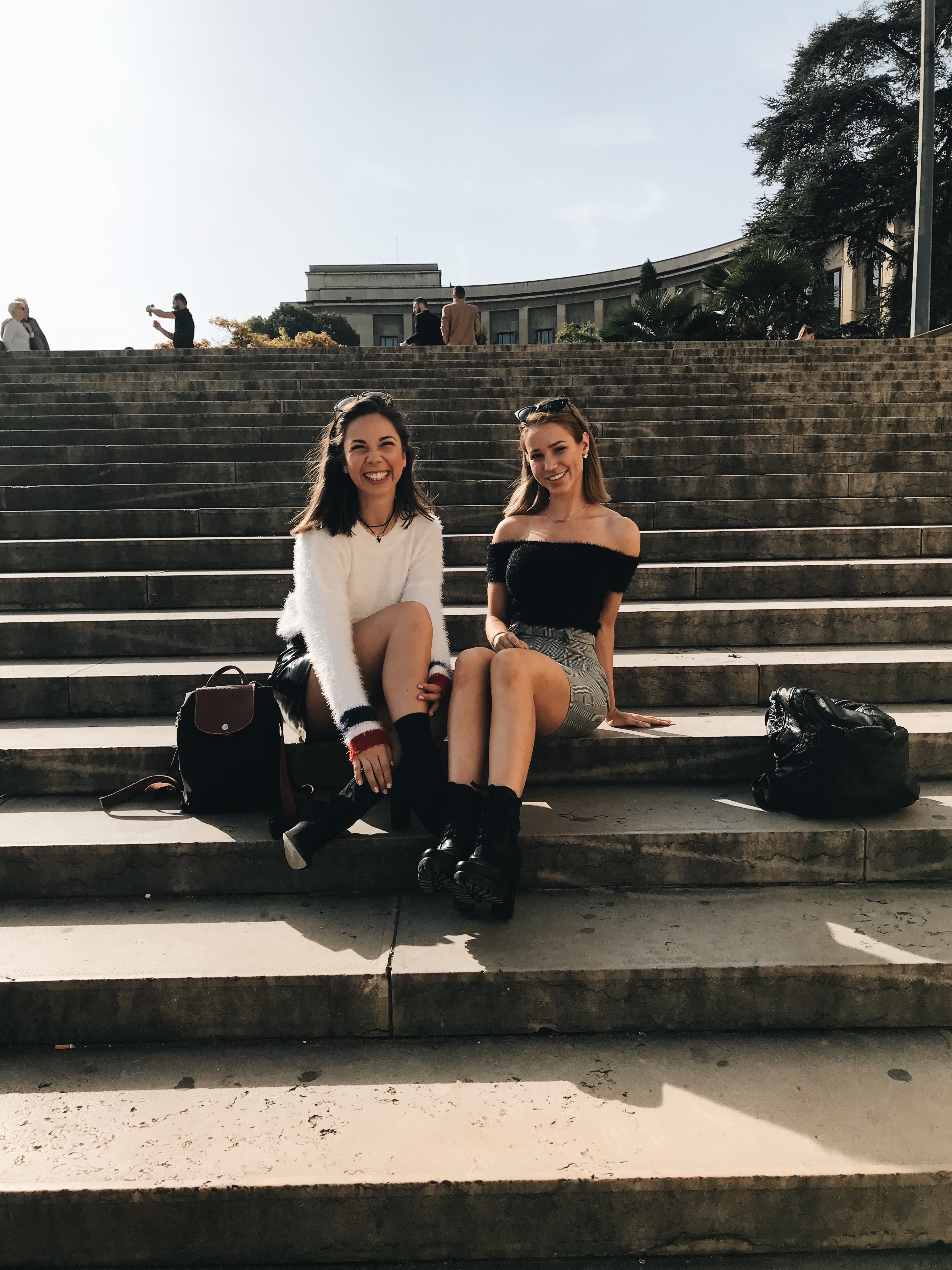 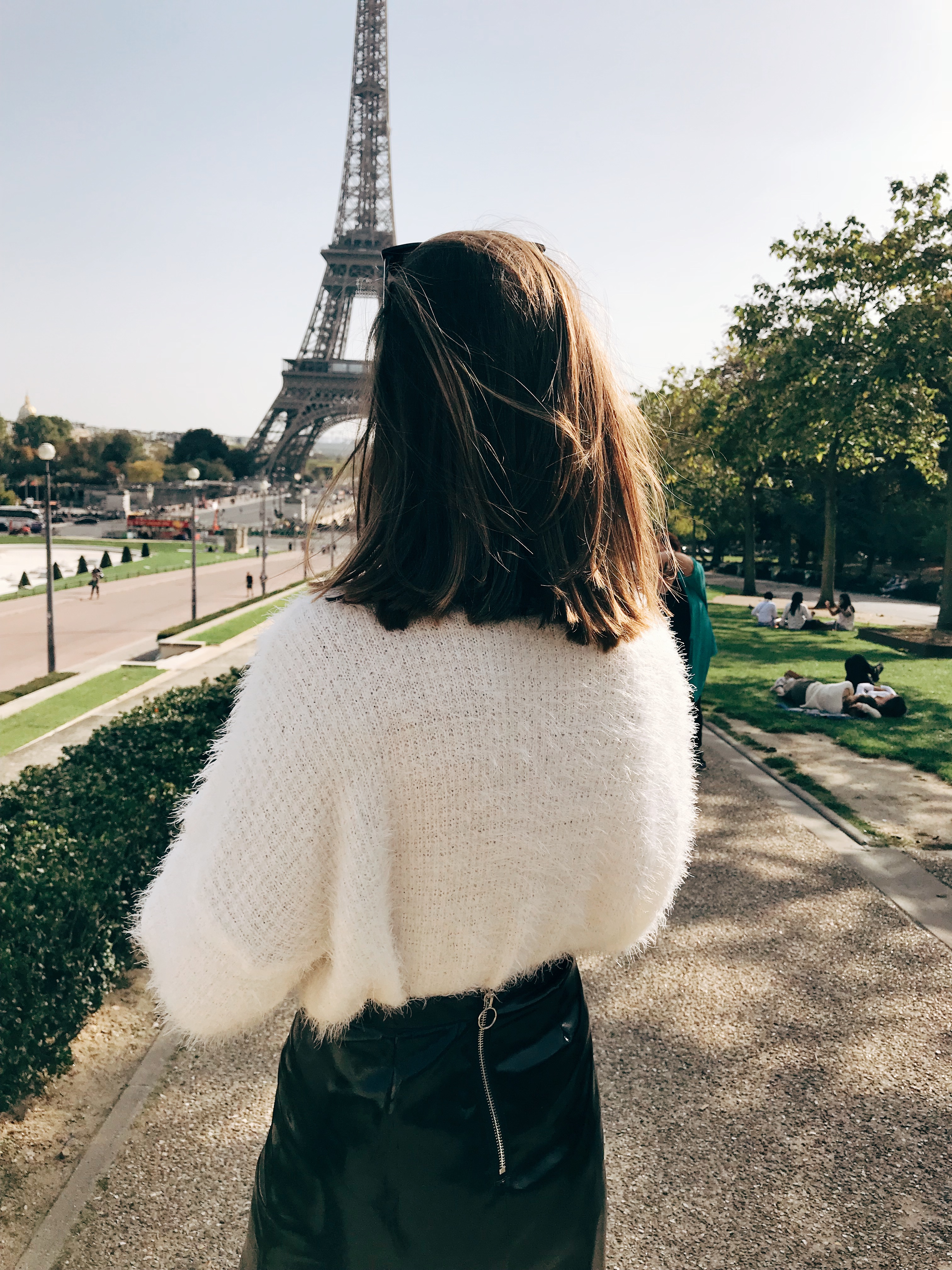 I also need to mention what happened on Friday, because I basically nearly died… An acquaintance of Noel’s had messaged him to say that should he want to, he could get up on a rooftop with incredible views of Paris. Obviously Noel and I were totally down, so we met up with Nawel (@lewandz) at the Place Vendôme and he took us to a nearby building. There, we walked up about 6 flights of stairs – at this point I’m in heeled boots, thinking why, why, why – and then up to a terrace. But that wasn’t the end of it. Hell no. We then climbed (again, heels!!!!) up what I can only describe as a caged maintenance ladder, to arrive at literally the top of a roof. Not a terrace. The top of a sloping metal roof. With no edge protection. The roof was also made of tonnes of panels which I would argue in hindsight were definitely not meant to be clambered on by three budding photographers. There was literally no way of stopping yourself from slipping if you went – and I think we were about 8 stories up at this point. Needless to say I was slightly on edge (lol) the whole time…

But the views were INSANE. It was just about getting to golden hour, and we had a more or less panoramic view of Paris. We spent about an hour up there just chatting and getting some shots, with me sticking to the one ‘safe’ area (a brick wall next to the ladder) and then clambered back down, at which point I re-considered my agnostic views on life and prayed thanks to just about every god under the sun…

Check out the pics – taken by Noel and by Nawel, hence the different grades – below: 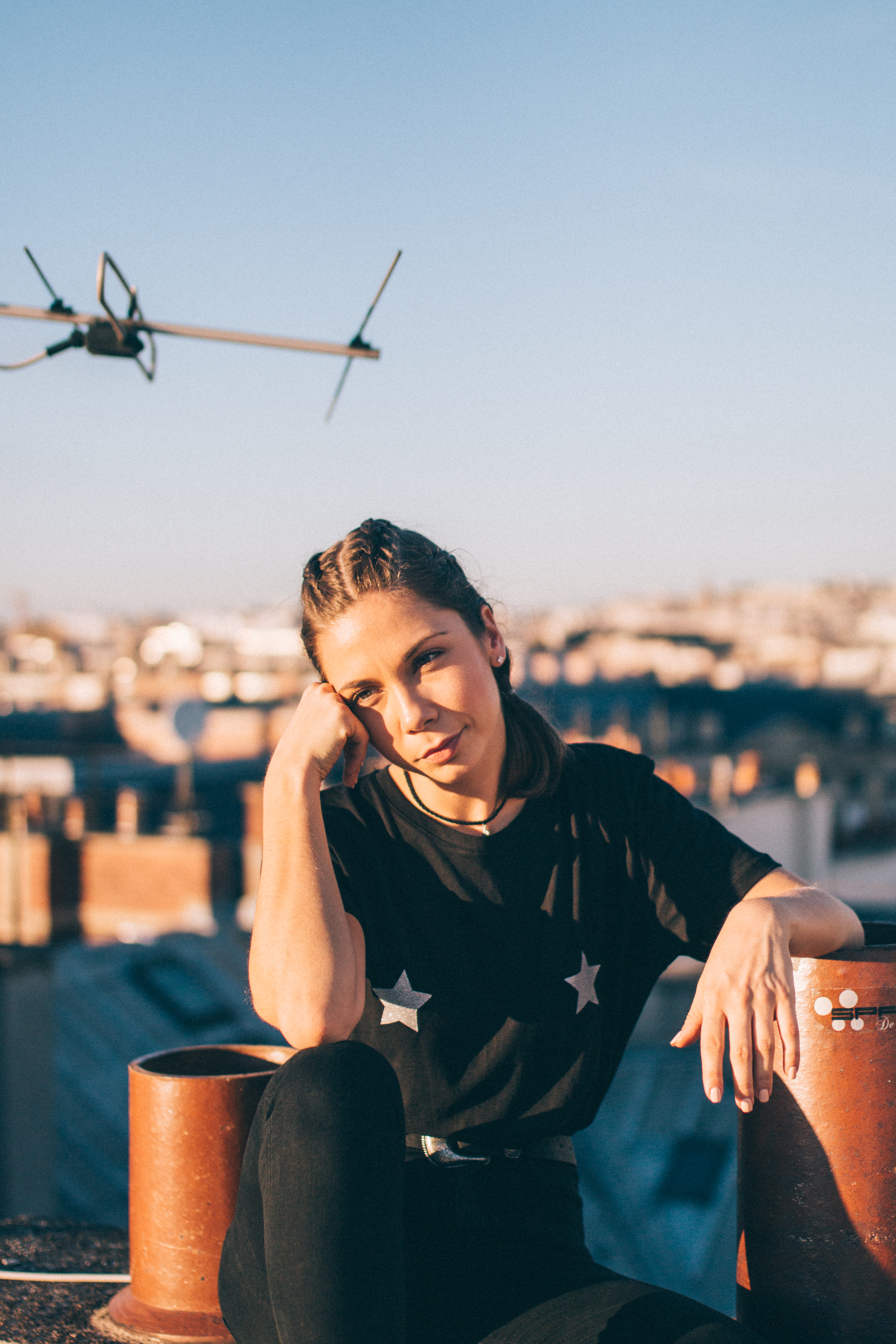 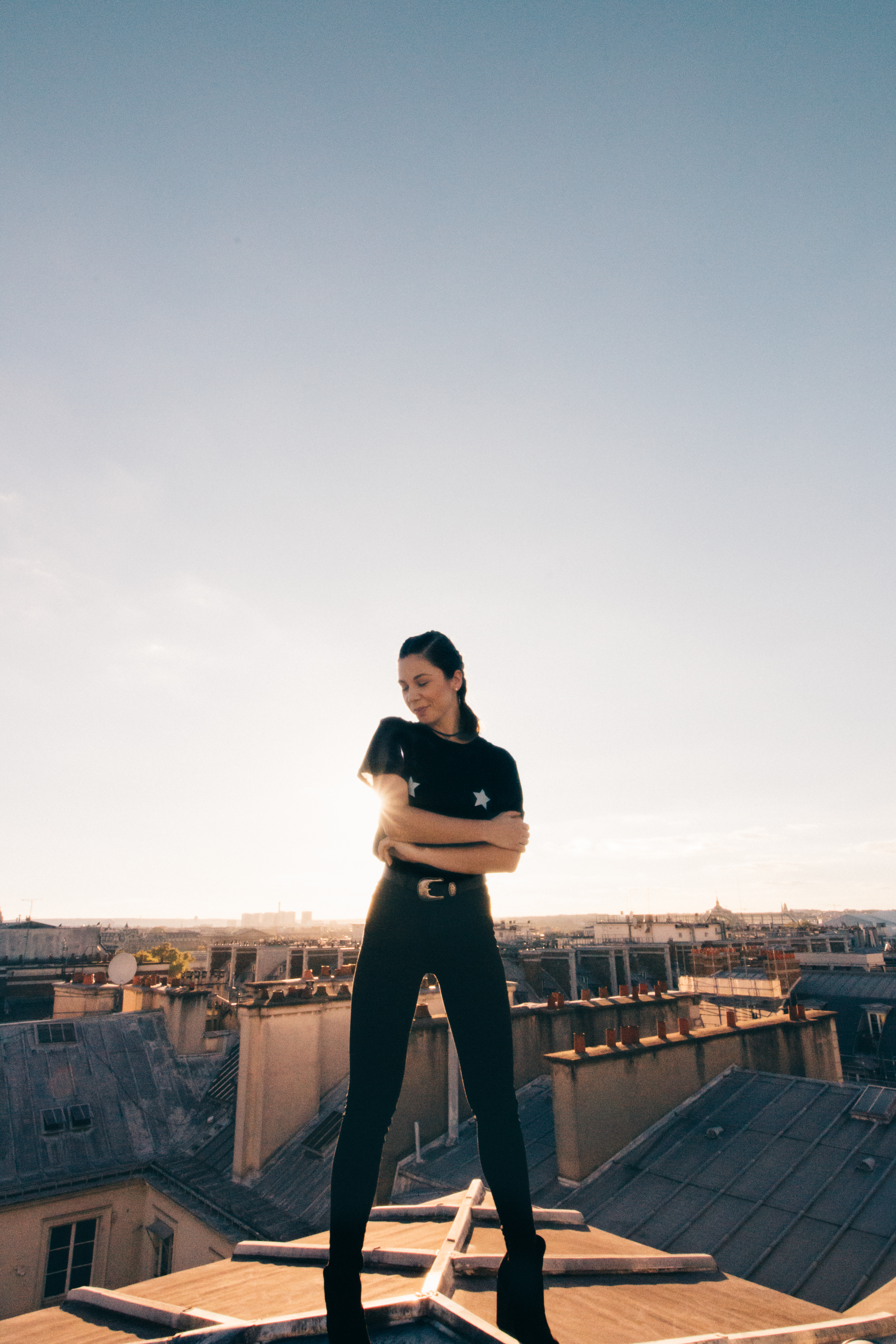 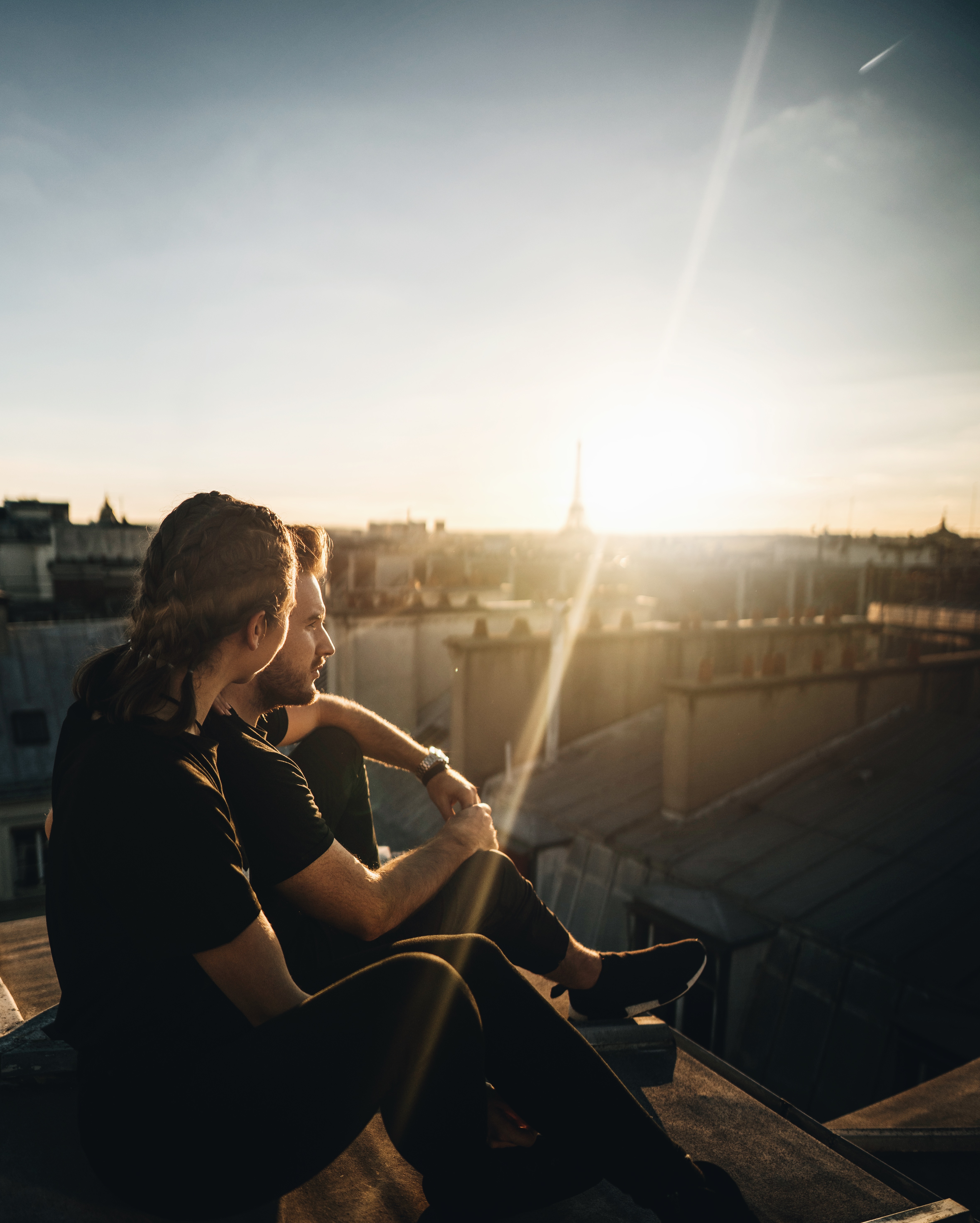 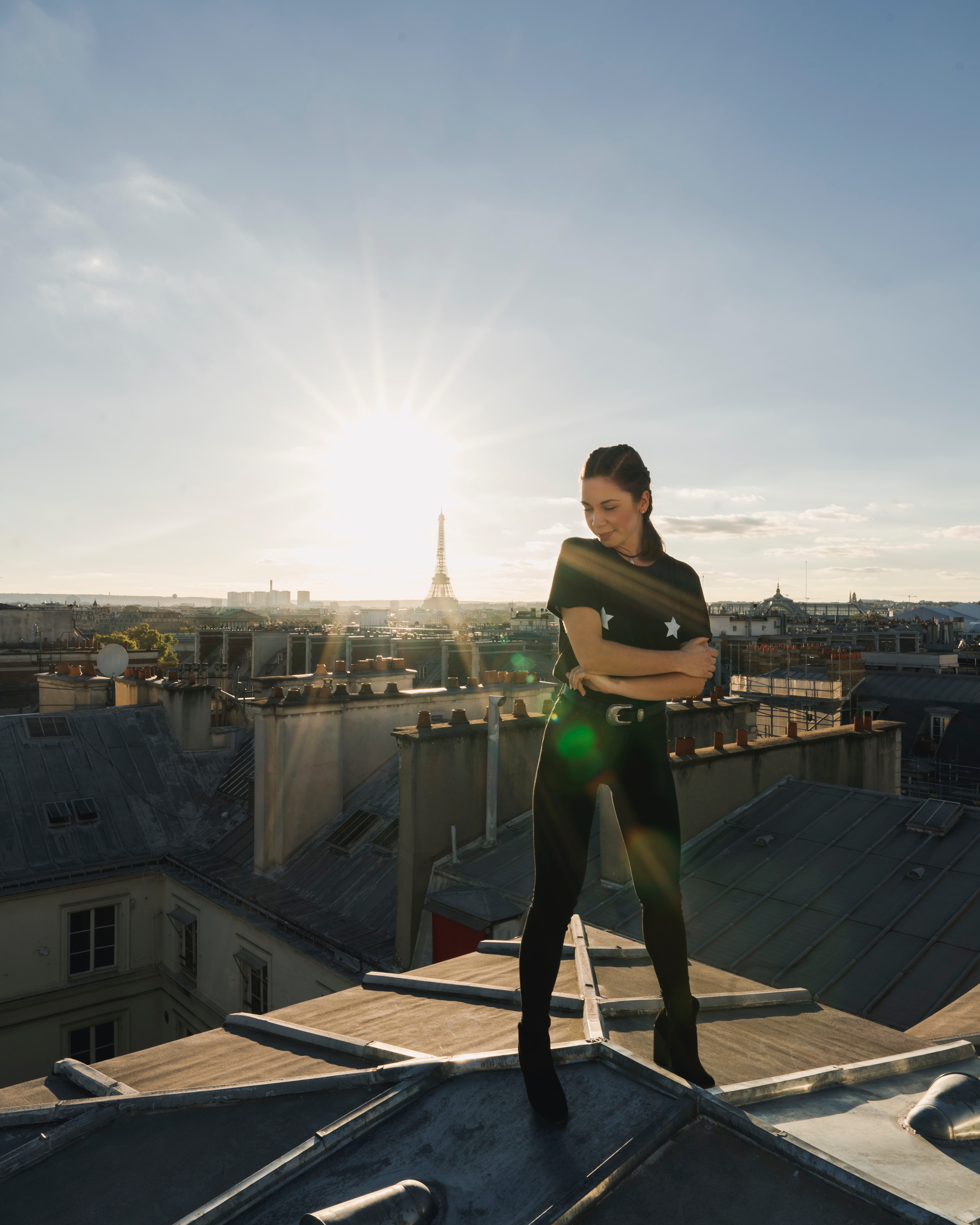 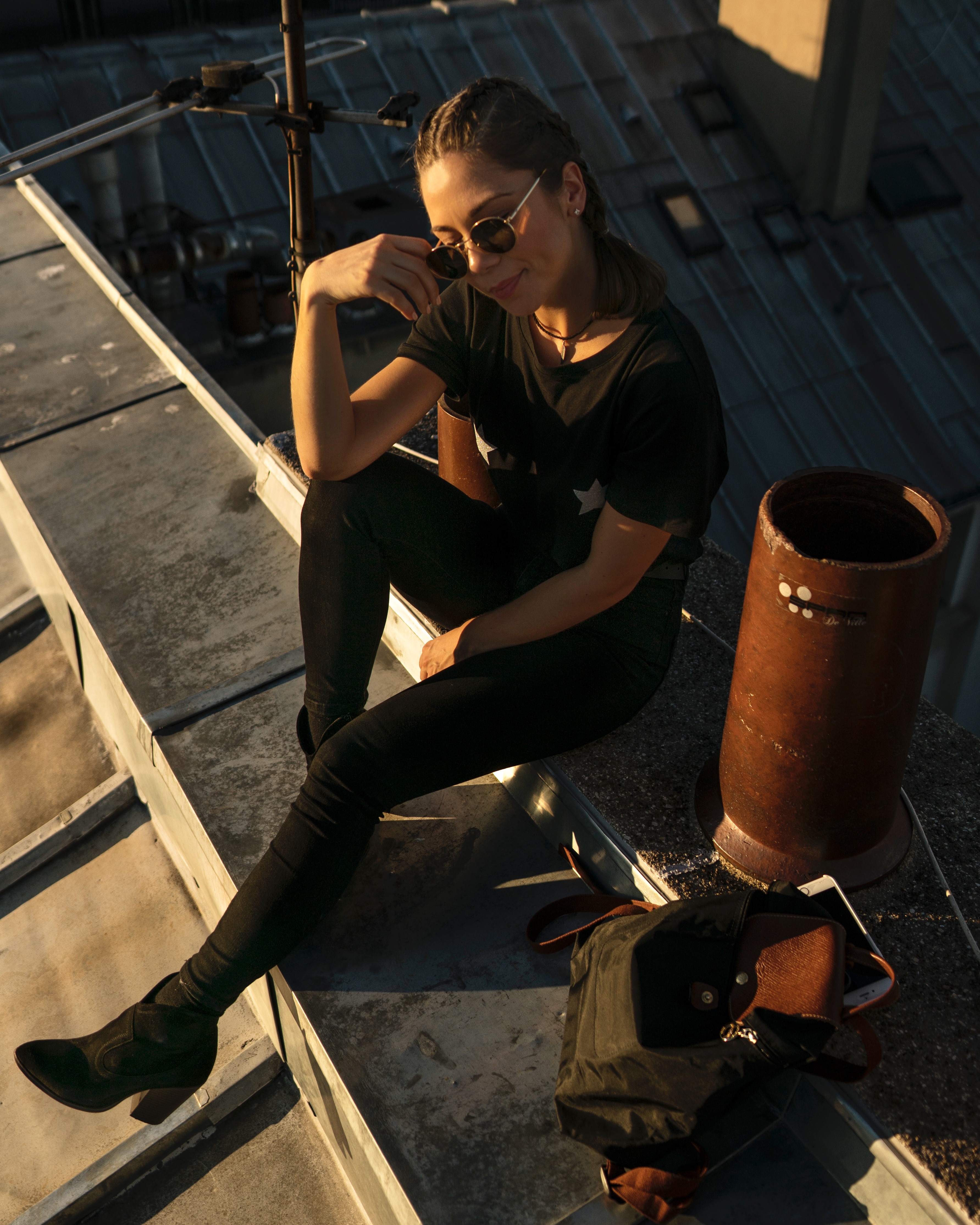 PS – I had my braids done at The Hive the night before. How swag?! I was inspired by a recent post by Aimee Song (@songofstyle)

Anyway – all in all it was an incredible trip from so many perspectives. It was amazing to be back in Paris, a city I am so familiar with; for the store to have been such a crazy success; for the social aspects and the morning-after stories; and for the new friends we have made.